“Kivancing.” That's what my husband calls what I do—creating Kivanc posts, editing Kivanc clips, developing Kivanc marketing strategies, and all the other Kivanc 'stuff' I do. But because my Kivanc activities now often mingle with other Turkish Drama actors and shows, “Kivancing” has morphed into a catch-all term to refer to my Turkish Drama escapades in general.

And “Kivancing” was exactly what we did on day 3 in Istanbul.

The KTNA admins and I had such crazy-fun adventures scouting Kivanc film sites on day one, why not search for more? Two of the mansions from Kivanc's shows are located on the same road not too far apart... Oh, yeah, let's go!

Several other fans on the trip wanted to see the Kivanc sites too, so they hired their own driver, and off we went in tandem, two vans of giddy women eager to see how the day's expedition would unfold.

First on the hit list, the Sinaner mansion, the estate where SO many scenes from Kuzey Guneyhad taken place. As we neared the waterfront address, I expected that the assorted shops and office complexes would give way to posh gated homes.

When our driver pulled over and parked, I thought, why are we stopping? This was a bustling commercial area. I craned my neck for a closer look, and sure enough, there were the familiar gates—sandwiched between a nondescript apartment complex and a string of ordinary shops. Ha!

We piled out of our vans and flocked to the front gate like a gaggle of giddy school girls. But it turned out that the estate isn't a home at all—it's now the South African Embassy! Could we go in? Despite our pleas, the guard wouldn't allow inside the gate, but we ooh-ed and ahh-ed anyway, thrilled to be “right there.” Of course we had to walk across the street and stand in the very spot where Kuzey once stood pining after Cemre and oohed and ahh-ed some more.

It's hard to explain the elation of being right there.

Looking at location photos just isn't the same. There's a kind of adrenaline rush you get at 'feeling' the place in the flesh—the sights, sounds, smells, and getting a full sense of the atmosphere and surroundings that pictures simply can't convey. This 'personal perception' of a location somehow makes it seem more real. The storylines may be fictitious, but the locations are real. And standing there, you can't help but think, all those actors we saw in episode after episode passed through these gates and filmed right here day after day. It was as if we intersected our lives with theirs in a very small way. 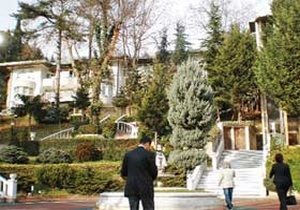 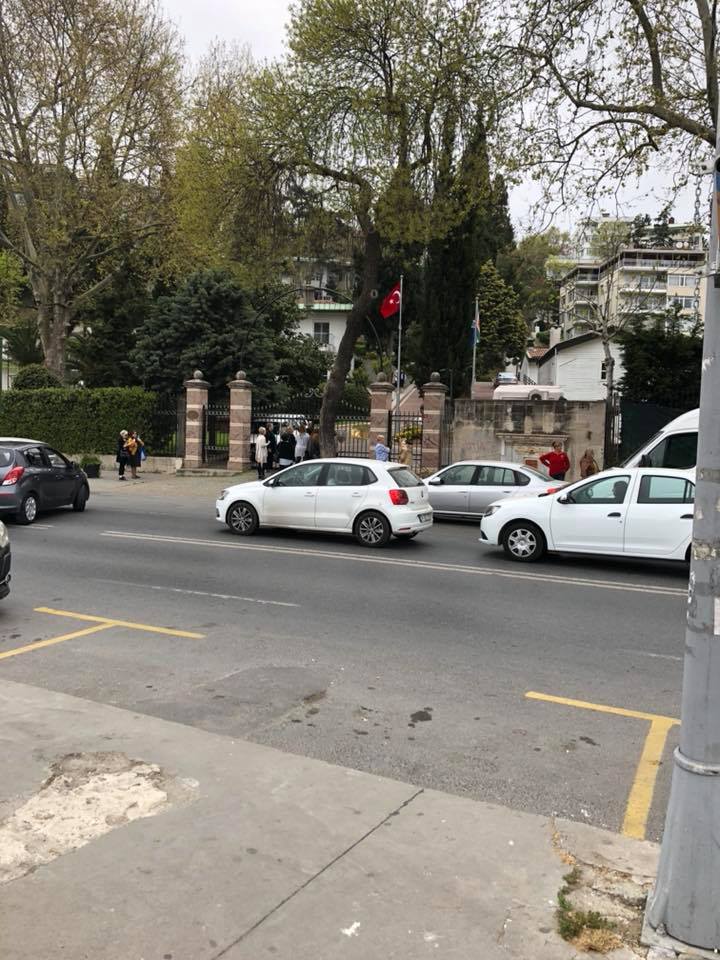 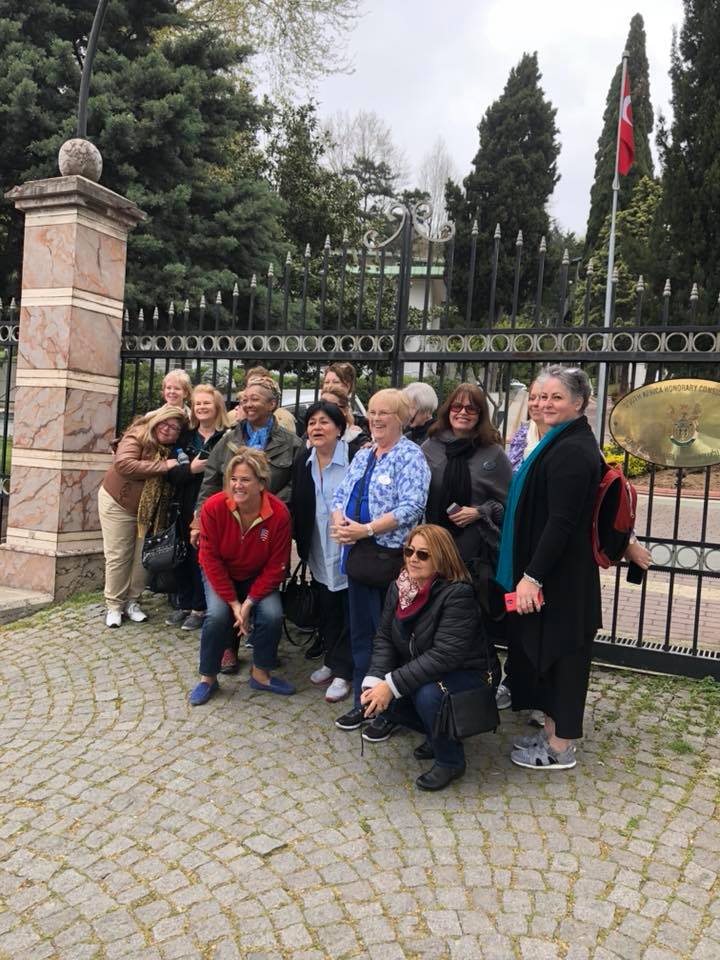 When satisfied that we'd seen all we could see there, we grabbed a cup of coffee at the bakery next door, then loaded up and resumed our journey along the Bosphorus. Next target, the Aski Memnu mansion. As we neared the address, the area became less congested, and on the waterfront side, long uninterrupted stretches of shoreline sidewalk afforded beautiful views of the water. This area was nice! I kept my eyes peeled for other mansions as surely Adnan's house would be surrounded by other elegant homes in this prime location.

Then we saw the house. Wrong again! Flanked by an office building on one side and a building on the other that needed some uh... 'urban renewal,' the Aski house stood out like a white rose among thorns.

As we crossed the road and approached the house, Nathalie remarked, “Seeing the locations makes you appreciate the cinematography--how they make a location appear and feel a certain way to fit the image they wish to convey.” Indeed the camera plays a key role in shaping our perception of the story's world. And truly, when I just focused on the house, a sense of elation washed over me and I felt as if I were stepping right into Behlul's world.

We could only stand at the gate and wonder if the inside still looked the same, but we were able to snap a few pics of the backyard area. After posing for a group picture and marvelling at thousands of small jellyfish at the pier's edge, we set out to find the Aski Memnu cemetery burned into our minds from heart-breaking ending of the show. Although we knew the general vicinity it was in, we didn't have a specific address. But like day one, part of the fun is the thrill of the hunt and chatting it up with the other gals who are as excited to see these places as I am.

After asking directions several times and exploring several wrong cemeteries, we finally found the right one—on a steep hill just across the street from the Bosphorus. We piled out of our two vans, then wound among scores of graves on the steep hill's narrow walkways, searching for the site with the right view of the water. Finally a caretaker led us to it, but at that very moment four men carrying a coffin followed by another eight or so men passed by and stopped at a nearby gravesite. Out of respect for their ensuing service, we weren't able to investigate for long.

Now mid afternoon, our tummies were growling for lunch. Lila loves Karadayi, and Mahir and Feride's iconic rendezvous restaurant wasn't far from Cesur's farmhouse. Since our tag-along group wanted to see the farmhouse, the hilltop cafe was a perfect choice.

Lila whooped with excitement when we pulled up. “There it is! There's the table where Mahir and Feride sat!” Those of us who hadn't seen the show didn't know the difference, but the view was spectacular! 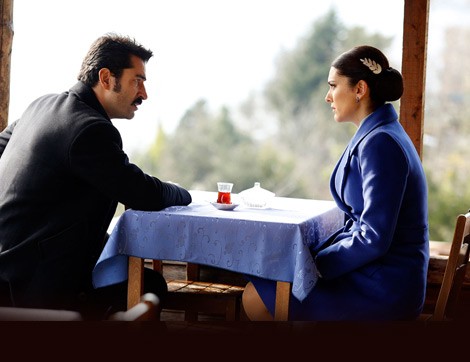 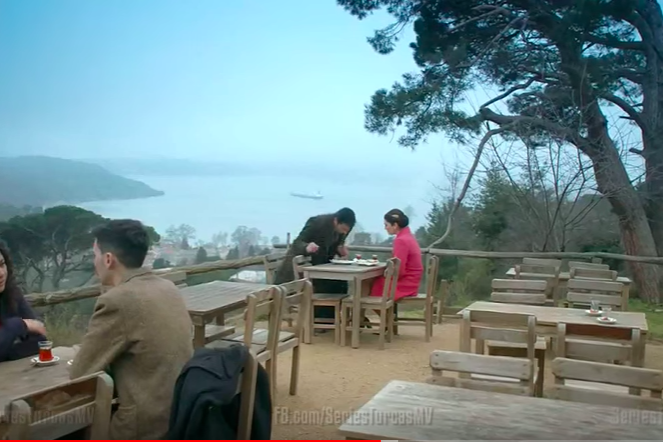 The cool weather shooed us into the restaurant's enclosed porch heated by a pot-bellied stove. Mahir and Feride had a table in there too, so naturally our elated Lila sat down in their spot.

Tables hummed with excited chatter in the cozy space. 'Talking dizis' with other English-speaking ladies who 'get' my obsession with Turkish Drama while looking out over the hills made it one of the most memorable meals of the trip.

With bellies full, we bid adieu to our tag-along group, then headed for the last destination on our hit list—a Mavi store.

As the sun was beginning to set, our driver parked on the periphery of Taxim Square and we bolted from the van. We had one hour to find (and shop) a Mavi store in what is considered theshopping district in the heart of Istanbul. Hoofing down one of the main streets, we passed throngs of shoppers, tourists, the nostalgic tram, and even a MacDonalds.

Thankfully the Mavi store wasn't hard to spot. A 'larger than life' poster of Kivanc in the window shouted “Mavi” before we even saw the store's sign. “Where are the Legends shirts?” we panted as we darted inside. The clerk pointed up the stairs. Who did we encounter in the stairwell? Oh yeah, more Kivanc!

I snagged their last Legend shirt and had just enough time to try it on and snap a pic with a Kivanc table display before we dashed in search of another Mavi store, hoping they wouldn't be sold out.

Ok, so Kivanc really is popular as the face of Mavi in Turkey and not just the symbol of Mavi in our Kivanc-crazed minds.

Not far away, another larger-than-life Kivanc poster greeted us in the store's front window and again in the stairwell. Goodness, he looks good in supersize!

While the others made their selections, I browsed the store which is very similar to Gap. As we raced back to the van, I clung to my bag and smiled. A Kivanc souvenir and a picture “with Kivanc" was the perfect way to end a very fun "Kivancing" day. Check out some more fun pictures from the trip here.

And take a few minutes to check out a video of our trek through Taksim Square in Istanbul!